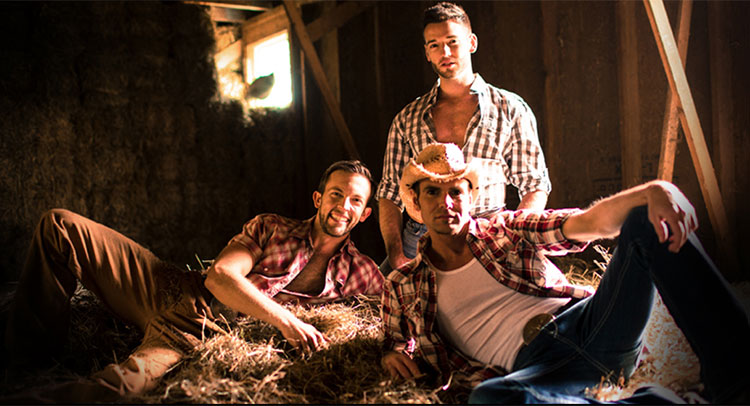 The Flaming Saddles saloon has hosted many celebrity patrons, most recently Miranda Lambert–whose music provided the soundtrack for the night she visited.

Here is an excerpt from the article

Flaming Saddles has quickly become one of my favorite places to visit in West Hollywood.

Where else can you see the hunky bartender who just made you a drink just moments later jump on a stage and do a sexy country-western dance?

Tomorrow night is a big party that will feature the first public appearance by country music singer Billy Gilman since he came out publicly last fall.

Billy and the owners of Flaming Saddles will both be presented with proclamations from the City of West Hollywood.

The owners are Chris Barnes and Jacqui Squatriglia whose New York location of Flaming Saddles is wildly popular, They have made it their mission to break down the cultural barriers of one of the last bastions of homophobia: the country music genre.

“We are passionate about being vocal allies for the LGBT community,’ the couple said in a joint statement. ‘We love country-western music and if we can be a small part in the fight against homophobia, then we will.”

WEST HOLLYWOOD, CA – On the heels of co-owners Jacqui Squatriglia and Chris Barnes’ success with their New York City Hell’s Kitchen, FLAMING SADDLES SALOON, they felt it was time to boot, scoot and boogie into West Hollywood to become the first country-western themed saloon located in the heart of L.A.’s gay mecca.

Grand opening festivities have been set for Wednesday, January 28, 2015 where West Hollywood Mayor John D’Amico will present a City proclamation to commemorate the event.

West Hollywood Mayor John D’Amico will present a city proclamation to commemorate the grand opening set for Wednesday, January 28.
Co-owners Jacqui Squatriglia and Chris Barnes opened the first Flaming Saddles in New York City’s Hell’s Kitchen in 2011, with huge success. The venue in New York has been compared to an all male version of Coyote Ugly (Squatriglia choreographed the moves at Coyote Ugly).

“Country-western music has historically been the soundtrack to people’s lives and has always had a huge LGBT fan base, as evidenced by watching our patrons mouthing the words to their favorite country tunes while bartenders are busy kicking up their heels atop the bar,” Barnes stated in a press release.
The grand opening celebration will benefits the Los Angeles LGBT Center and Ronnie Kroell’s Friend Movement–a grass roots arts and education “cause for profit” company that celebrates friendship, builds confidence, and prevents bullying, by connecting conscientious organizations and caring people.
Platinum-selling country star Billy Gilman, who recently made headlines for coming out as an openly gay man, will also be honored as a special guest. “Now that I have finally found my place as a person, I look forward to being an inspiration for others and it will only make the music that much better,” Gilman stated.
Recently voted by New York Magazine as the #1 gay bar in Gotham, Flaming Saddles in West Hollywood will feature all the same elements of its famed east coast location, with full bar service, country-western tunes on the all-digital jukebox and dancing bartenders, performing choreographed dance routines live to the delight of patrons throughout the day and night.

There is a reason to mention Flaming Saddles in the same breath as Coyote Ugly, the raucous First Avenue saloon where female bartenders dance on the bar. Jacqui Squatriglia, 48, who choreographed the moves at Coyote Ugly, does the same at Flaming Saddles, where she is an owner.

Now she and her business partner and boyfriend, Chris Barnes, 54, say they are on their way to opening gay country-western bars in other cities.

Mr. Barnes, a songwriter and actor who appeared on “Seinfeld,” “Curb Your Enthusiasm” and “30 Rock,” is also working on a musical about Flaming Saddles. And, indeed, a reality-television producer has been pitching a series that would focus not only on the bar and its customers, but also on Ms. Squatriglia, Mr. Barnes and their relationship. They have two therapists on call around the clock.

This is no shot-and-a-beer joint. The top-selling drink at Flaming Saddles is vodka and seltzer. (Amid calls for a boycott of Stolichnaya to protest attacks on gay people in Russia and antigay legislation backed by President Vladimir V. Putin, Flaming Saddles changed its “midnight Stoli hour” to a “midnight Absolut hour,” with the same $8-a-drink price.)

The jukebox has John Denver’s “Country Boy” and Will Smith’s “Wild, Wild West.” The room is a homage to a frontier-town saloon, or perhaps to the set of “Annie Get Your Gun”: comfortably dark, even in the daytime, with bordello-red drapes, velvety patterned wallpaper, wide-plank floors and an old-fashioned pressed-metal ceiling.

And there is a down-home sensibility rooted in a kind of nostalgia for places where the cowboys are real: The couple estimates that 60 percent of Flaming Saddles’ customers grew up in Oklahoma, Texas or Tennessee (even if, Mr. Barnes said, many headed for New York because they were uncomfortable acknowledging their sexuality there).

“There was not a gay bar in Hell’s Kitchen for me,” said one regular, Brianne Demmler, who went there with her girlfriend on the day they became engaged last year. “I can walk into Hardware, and they’re cold. I can walk into Barrage, and they’re so busy. I can walk into Boxers, and it’s too loud. You walk in here, and even when there are 200 people in here, somebody behind the bar makes eye contact to acknowledge you’re here.”

Steven McWilliams started out stocking liquor and doing behind-the-scenes chores. Now he is serving up drinks and is part of the troupe dancing on the bar. “You know, gay bars for the most part thrive on sexual energy,” Mr. McWilliams said. “That’s how they keep people coming back, the whole idea of finding someone to go home with or flirting with a sexy bartender. I’m sure people enjoy flirting with us, and they like watching us dance on the bar, but we keep all of our clothes on and we’re not gyrating in people’s faces.”

Nor are they performing the ballet “Rodeo” just inches away from patrons. People pull out their cellphones and make videos as the bartenders jump and pivot; the dance captain, Dane Sorensen, likes to add cartwheels and splits. But the staff is under orders from Ms. Squatriglia not to let things get too suggestive.

“Our style is not raunchy,” she said. “Not to say that’s not good at other places; it’s just not what we set out to do.”

They may be long on energy, but they are short on space. The bar, only 32 inches wide, is a runway of possible hazards. As dancers, the bartenders must sidestep customers’ drinks, not to mention elbows. Ms. Squatriglia eliminated one potential problem in the beginning. She put in a flat bar top, replacing one that had an ornamental lip that could be tripped over, and she insisted that it be made of harder wood. “No divots from when they pound their heels,” she said.

The reaction from the crowd? “It’s a fun experience,” said Roger Welch, a theater director who discovered the bar when it opened. “Everyone’s excited. It’s country line dancing. I think for that style, they do quite well.”

Customers are not allowed to jump up and dance along. “We point to the sign,” Mr. Barnes said. It is over the bar and says, “No woohooing.” He said it was there mainly to keep out straight women’s bachelorette parties.

Flaming Saddles was Ms. Squatriglia’s idea. She and Mr. Barnes met in 2009, when he had a part in the film “Good Day for It,” an independent movie shot in rural Pennsylvania, and she was an executive producer. After what Mr. Barnes described as “the usual on-set romance,” they moved to Manhattan together and had one of those serious couples talks.

“I said, ‘Do you want to get married and have kids, or do you want to have fun?’ ” he recalled. “She said, ‘Have fun.’ I said, ‘What are we going to do?’ She said, ‘I want to open a gay country-western bar.’ I was trying to be spontaneous and comedic, so I said, ‘As long as we call it “Flaming Saddles,” I’m in.’ Then I said, ‘Not that it matters, but why?’ ” She said that at Coyote Ugly, she would work out a routine, only to say to herself, “I wish that was boys.”

She had definite ideas for Flaming Saddles — “I had opened 25 other bars,” she said. “I knew what I wanted.” — and Ms. Squatriglia and Mr. Barnes rejected advice they got as they prepared to open.

The timing turned out to be good. Older gay bars have closed since Flaming Saddles opened. Rawhide, a stalwart on Eighth Avenue and 21st Street for 34 years, shut in March. Splash, on West 17th Street in Chelsea, closed in August after 22 years. “There’s something in the air about this that at this particular moment makes perfect sense,” said Marvin Taylor, director of the Fales Library at New York University and an expert on the history of bars and restaurants.

So does the location, he said: “They put it in the center of where the gay community is, in Hell’s Kitchen, because Chelsea has completely disappeared.”

Mr. Barnes said owning a gay bar had been something of a consciousness-raising experience. “As a straight man, I didn’t realize the bashing” gay men took, he said.

“We’d see Midtown West yuppie couples” walking by when the bar was under construction, Mr. Barnes continued. “They’d go, ‘I hope it’s not another gay bar.’ I’d say, ‘Excuse me?’ I had never felt it was my fight, but once we put our brand up, it was. And then I looked at Sean Penn’s portrayal of Harvey Milk” — the gay city supervisor in San Francisco who was shot to death in 1978 — “and realized, it’s a civil rights issue. What’s that …”

His voice trailed off, but Ms. Squatriglia finished the sentence with the word “Stonewall,” meaning the Stonewall Inn, the West Village bar known as the birthplace of the modern gay rights movement.

“It was owned by a straight family, too,” he said. “They happened to be a crime family” — the owner was reputed to be a frontman for a Genovese crime capo known as “Matty the Horse” — “but they were straight.”